In this post we will cover all there is to know about, like the headline says: The infamous balance shaft sprocket of the 2.0 TFSI – The issue and what to do about it! So without further due, lets get started.

What is the balance shaft sprocket?

The 2.0 TFSI engine is installed in a lot of vehicles produced by the manufacturers Volkswagen, Audi, Skoda and Seat. KTM X-bow uses it as well.
Throughout the years there have beens some variations and even a completely new base engine has been introduced. The once we are focusing on in this article, are all built upon the EA113 platform, you can check your engine code for reference.

These engines use a special kind of combined balance shaft and oil pump unit, or module if you will.
In this module two balance shafts can be found, counter rotating to each other with double engine RPM.
The oil pump and one of those balance shafts have one chain sprocket attached them each and it is the one the shaft that is giving people issues. It is really the weakest link in the entire motor. 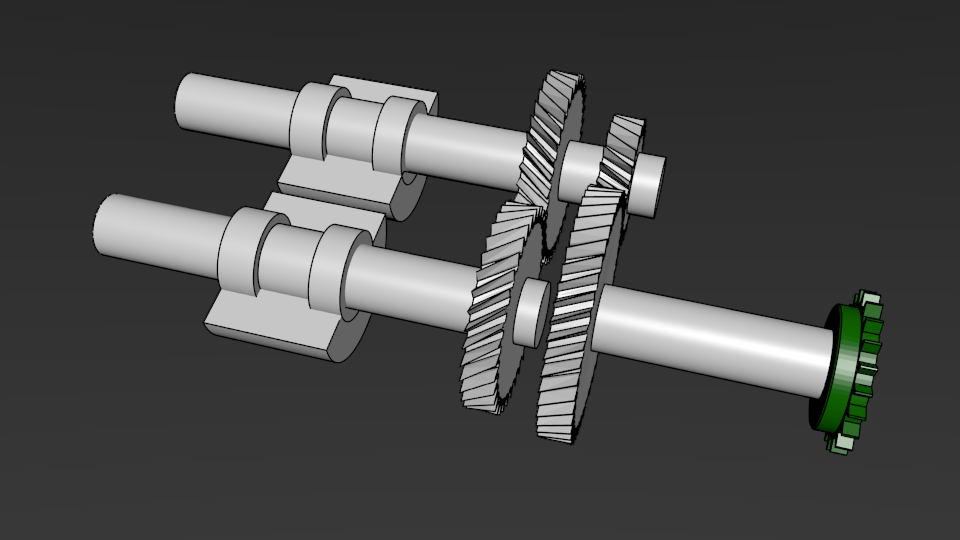 The engine RPM is transfered inside the module with a gear ratio of 1:2

let us take a closer look at the sprocket

In order to better understand what actually happens when the sprocket fails, we first need to be aware of an issue and constant challenge for the engineers tasked with developing new engines.

Because of the emission regulations forced upon the industry, engines are pushed further to their limits. They have to deliver high power output from a small cylinder displacement and weight. We see flywheels turn into dual mass and even lightweight bolts. Everything is being optimized.
This does not come without its new problems.

If we look at this particular engine, we can see the problem has for instance shown itself in fluctuations throughout the rotating parts. The rotation av a crankshaft is never constant but rather consists of accelerations and decelerations.
The fluctuations caused by this are transered to all components driven directly by the crankshaft. Because the balancer shafts are relatively heavy, VAG fitted a chain sprocket with an internal damping system to protect the chain form breaking. However this merely moved the problem down the line.

With the chain releaved from stress, the force has been moved to the damper inside the sprocket. This works rather well. For a while. Just like any springs would, even those in the sprocket do get exhausted over time.
When they do to a certain point the result will be the sprocket starting to hit its limits, which has an similar effect as the on found in an impact wrench. Eventually the sprocket will brake with torn chain and no oil pressure to show for it.

So what is there to do about this now?

If the engineers from VAG would have thought this whole chain of events through, they could have solved the issue at hand in a very different matter. For instance they could have designed a system for the sprocked to be hydraulically dampened in order to absorb the energy.

But since this was not the case, we have got what we got today to work with. We manufacture and sell to different solutions to this problem. The first one is a solid sprocket and the second is a kit to disable the balancer shafts all together. I personally always recommend the latter one.

By completely disabling the balance shafts, the stress left on the chain is almost not worth mentioning.
The modification also makes the engine a bit more responsive to the throttle because there is less weight to be accelerated.
Also there is no risk of other common issues regarding the shafts, such as as seizing or excessive play.

We have invented our own solution, which we call “the freewheel” to make it as easy as possible for TFSI owners to install. No cutting or drilling needed. Simply remove one bolt and replace. The kit has been engineered and manufactured by ourselves in sweden, guaranteeing the highest standard of quality and performance. Eventually someone will try and copy it, but this will always be the original.

The simple yet ingenious part of our solution makes it possible to undo if desired.

With over 500 sold delete kits, in sweden alone, there has been only one complaint regarding vibrations. In that case the engine had 520hp and extra hard mounts installed. The customer choose to install our solid sprocket instead. 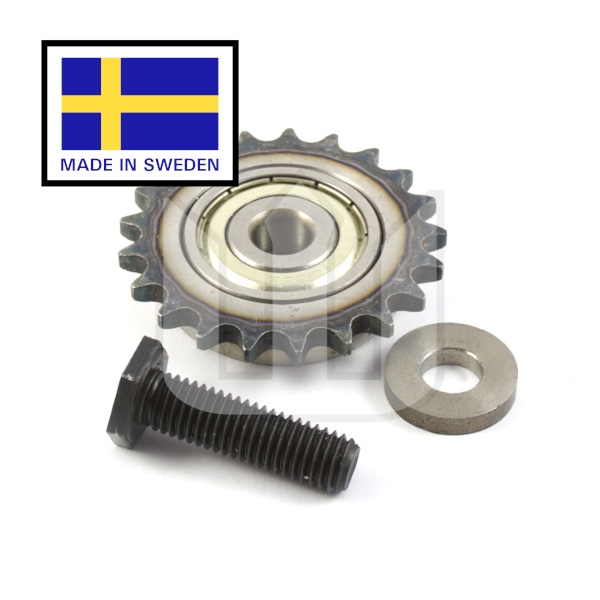 The other soultion we offer is a sprocket made as one solid part, without the troublesome damping. I myself would go with the delete option, since this one does not come with the ame advantages. The freewheel is the most reliable solution by far.
That being said, a lot of customers still go with this solid sprocket. It is really a matter of opinion, since the price is the same for both. 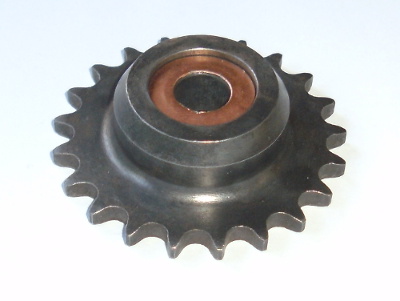 Other solutions out there

A quick google shows there are many different fixes to be found, some of them we have encountered in our workshop. Because of having examined those, we feel very confident that our concept is the most thought through out there.
Let us have a look at some of them.

According to the internet this is supposed to be the most failsafe version. Just like ours its purpose is to disable the balance shafts entirely. This is done by cutting the sprockets inside the module so the shafts are no longer driven.
The downside is of course that you are ruining your module and you cannot undo this to regain the funtcion of the balancer shafts.

The sprocket we are talking about here has never been available from VW / Audi, and probably never will be. Yet there some to be found on the world wide web, which look almost identical to the original. All of them are copies from China.
We have been working on a couple of cars where they have been previously installed, and have therefore been given a good chance of studying theme a bit closer.
Apart from our doubts that their springs could withstand what the OEM could not, we have found something interesting. Most of them seem to be missing one very important component. On the OEM there is a small diamond washer making sure the sprocket is fixed into place without slipping. This washer seems to be missing on the ones we have encountered. In a bad scenario a slipping sprocket could lead to damaging the shaft end.
Also we have seen product images on the internet where you can see clearly that the sprocket is not centered even before being installed. This is because the internal springs are of different stiffness.

Just the other week I received an e-mail from a customer who bought our freewheel. He wrote to tell us about his experience with the chinese sprocket. According to him the car went well for about 50km before starting vibrate again due to the springs failing. 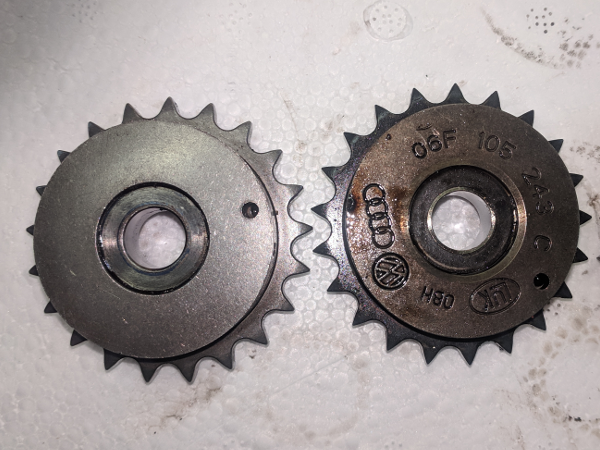 To the left you can see the chinese sprocket without the washer and the right one is an OEM sprocket that has been replaced as a precaution. The chinese has spun and damaged the shaft.

Solid design sprockets from our competitors

On Ebay there quite a few solid design sprockets to choose from. Some of these we have encountered in our shop as well, when customers bring their car in with low oil pressure or vibration isssues.

The most common mistake we have seen, is the engineers trying to replicate the visual design of the sprocket.This adds unecessary weight to it and resulting in increased moment of inertia. Our sprocket is designed, keeping this in mind, to be as light weight as possible without sacrificing its durability.

The second design flaw we see a lot is, just like the chinese copies, the lack of using a washer up to the task. We use a special kind of washer which we have developed and tested for this application only. 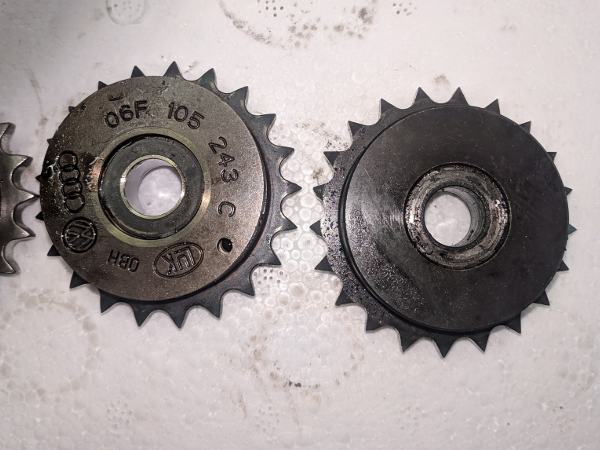 This sprocket is designed to resemble the OEM, which means it is unnecessery heavy and it also lacks the diamond washer. Because of this it has been spinning on the shaft, damaging it.

Below are three different kits for deleting your shafts and one with the solid sprocket. 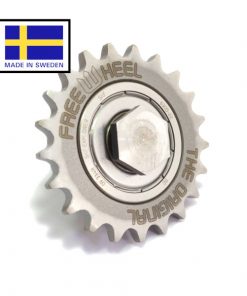 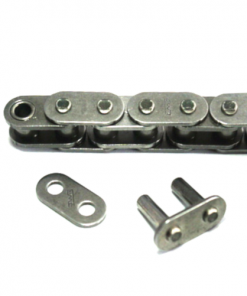 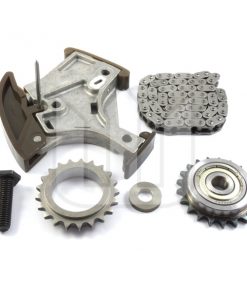 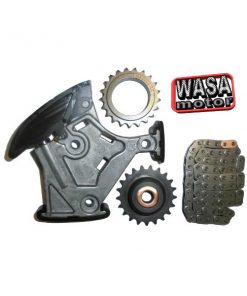 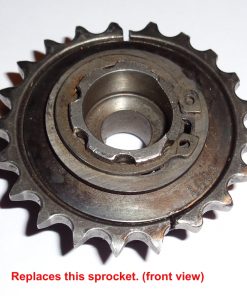 4 thoughts on “The infamous balance shaft sprocket of the 2.0 TFSI – The issue and what to do about it!”